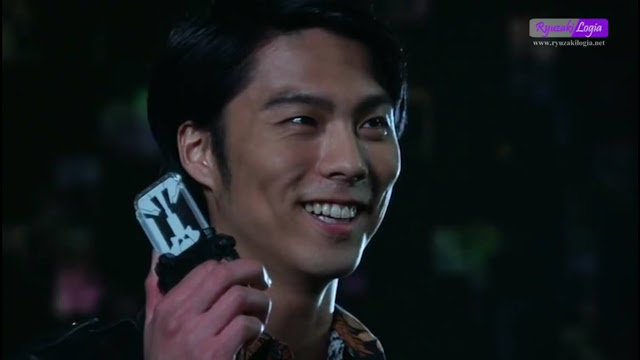 Sinopsis:
Through Kiriya’s laptop, the group stumbles upon his last message regarding a game needed to be cleared, the treasure-hunting game Bakusou Treasure. Hiiro plays the game first as he went into the virtual world and joined by Level 1 Lazer as a navigator. The two met Motors Bugster and gets a Game Over from destroying it. Seeing the game acted in a similar way to RPG, Emu used it and ran from Motors when negotiations failed. By disguising as a Bugster Virus, he managed to get the location of the treasure but received a Game Over when he arrived at the mysterious door and defeated by Genm.
Hiiro believes that Kiriya tries to fool the CR again in his posthumously but Emu decided to play the game again. Arriving at the door, he canceled his transformation and forced Lazer to reveal his purpose. Kiriya eventually reveals that Bakusou Treasure is a prototype of an ultimate game that would be produced by Genm Corp.. Kiriya managed to break into the game and tries to take on the data of dangerous Gashats that Kuroto hidden but his actions were blocked by a security program that took the appearance of Genm. Emu joins Kiriya again and the two bust in, leaving Lazer to deal with Genm while Ex-Aid grabs the treasure. Picking one of the Proto Gashats (Bakusou Bike), Ex-Aid’s synchronization changed its appearance as he used it and destroy Genm. While gloating over their victory, Lazer steals the Gashat and disappears with other Proto Gashats.
Back in the real world, Emu believes that the real Kiriya helped him due to navigation system’s traits, although Hiiro debunked this. In the post credit scene, Kiriya was shown in the Game World holding the normal Proto Bakusou Bike Gashat while smiling and proclaims to “start the race”.