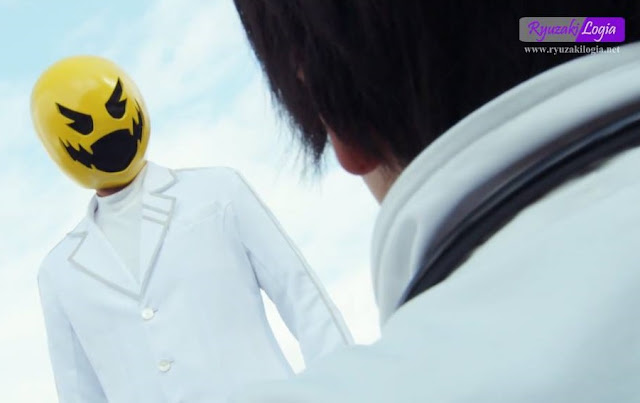 Sinopsis: At Genm Corp., CEO Kuroto Dan looks over the first thirteen Heisei Rider Gashats. Turning to his Kamen Rider Battle: Ganbarizing machine, Dan presents the next three Rider Gashats which are completed by it as he enthusiastically announces to himself that he now holds a complete collection of Gashats with the power of Legends.
Having been instructed by the CEO to return the Kaigan Ghost Gashat he used in the recent incident with Dr. Pac-Man, Emu Hojo is heading to Genm Corp. with Asuna Karino when they are confronted by a Collabos Bugster. Using the Kaigan Ghost Gashat on hand to fight using Takeru Tenkuji’s strength in the form of Ghost Gamer, Ex-Aid engages the Bugster but is quickly beaten back. Dan then arrives; observing that the Bugster is empowered with the Proto Gekitotsu Robots Gashat, the same Gashat that Dr Pac-Man stole, Dan instructs Emu to retrieve it. Opening a briefcase containing the Legend Rider Gashats, Dan throws the Full Throttle Drive to Ex-Aid, allowing him to assume a Gamer form based on the passionate detective Kamen Rider Drive. Dan reveals that he had been secretly gathering data from the Kamen Riders’ battle with Dr. Pac-Man, hoping that these newly created Gashats will be of use to Emu.
As intended, Ex-Aid is able to quickly turn the tide in this new form and successfully disarm the Bugster with Drive’s Critical Strike, retrieving the Proto Gekitotsu Robots Gashat which he hands to Dan whom he thanks while the CEO notes the result is all thanks to his skill as a genius gamer. Before Ex-Aid can proceed to finish the Bugster however, it switches to Giri Giri Chambara and makes a strike at Dan before Ex-Aid gets him off. Ruffled but well, Dan appropriately provides Ex-Aid with the Toukenden Gaim Gashat to match the now katana-wielding Bugster. Switching to the Gamer of the Sengoku-themed warrior Kamen Rider Gaim, Ex-Aid meets the Collabos Bugster in a sword battle. Meanwhile, while admiring Ex-Aid’s performance, Asuna realizes that Dan has gone. Unbeknownst to Asuna, Dan has left the scene to enter the last phase of Legend Rider data collection personally as he uses the Magic The Wizard Gashat to assume the Gamer form of Kamen Rider Wizard.
Neutralizing the Collabos Bugster with Gaim’s Critical Finish, Ex-Aid is confronted by Genm as he appears to claim the Proto Giri Giri Chambara Gashat personally. Recognizing the Wizard Gamer as the “Black Ex-Aid”, Ex-Aid is swiftly outmatched before being forced out of his transformation by Wizard’s Critical Strike. Reverting to his default Action Gamer, Genm recovers the three Rider Gashats that Emu has just used. Announcing that he has collected all the data he needs, Genm uses the power of the Legend Rider Gashats to complete his Ganbarizing Gashat. Using the blank Collabos Bugster as a conduit to harness the power of Kamen Rider Battle: Ganbarizing, a game Emu is unfamiliar with, Genm brings forth manifestations of Kamen Riders Double, OOO and Fourze. Advancing on Emu, the three Riders are held off by the sudden appearance of Dr. Pac-Man, coming as a shock to both Emu and Genm as he presents his own three Bandai Namco Gashats.